A morning yoga lesson, eight hours at the desk (with a break for lunchtime shopping), then a catch-up with friends over cocktails in the evening.

Until quite recently, this normal working day would  have unfolded over several different locations across a town or city.

Now, in the age of the coronavirus, such activities are taking place online. And it is likely that these new digital habits will outlast the pandemic.

Indeed, whatever the vantage point, it is clear we are living through an unprecedented expansion of our digital world.

The experience has generated a thirst for even more and better tech - offering attractive opportunities for businesses who can deliver it.

Netflix secured 16m new accounts in the first quarter of 2020 – nearly double the number of the previous three months.

China’s Tencent, meanwhile, saw a 31 per cent year-on-year jump in online game revenues as customers sought escapism in “Honor of Kings” and “Peacekeeper Elite”. Italians increased the time they spent on Facebook’s apps by 70 per cent.

As lockdowns are eased across the world, it would be natural to expect that growth fade over time.

But the fundamentals paint a different picture. After all, so far only 59 per cent of the world’s population has access to the Internet.

And as the so-called “Generation Hashtag” – the digital native group born between 1991 and 2005 – grows up and increases its economic power, demand for digital will grow. This demographic represents about 34 per cent of the total population today.

The rollout of 5G networks will provide an added boost. Already making inroads in the US, China, Korean and other developed markets, 5G has the power to transmit data much faster than current phone networks, handle much higher volumes of information, and require much less battery power.

Because the digital demands of the lockdown have put heavy pressure on existing capacity, it seems likely that the rollout of 5G will now proceed more rapidly. This, in turn, will fuel the expansion of the Internet of Things, opening up an almost endless set of digital possibilities.

Around the home,  for example, this could mean tomato plants that can ask for water, roofs that warn of weaknesses after extreme weather, jackets that keep parents updated on a child’s location, trash cans that ask to be emptied, and milk cartons that point out expiration dates.

Moving around town, that could mean having a heads-up on open parking spaces, second-to-second data on surrounding traffic for driverless cars, local air-quality warnings, and much more.

Better connectivity will boost tech growth on a number of fronts. Three in particular stand out.

All three had already been on the rise, but as a result of the pandemic, have now massively broadened their customer and client base. Now that more people have experienced what is possible, we expect strong momentum to continue. 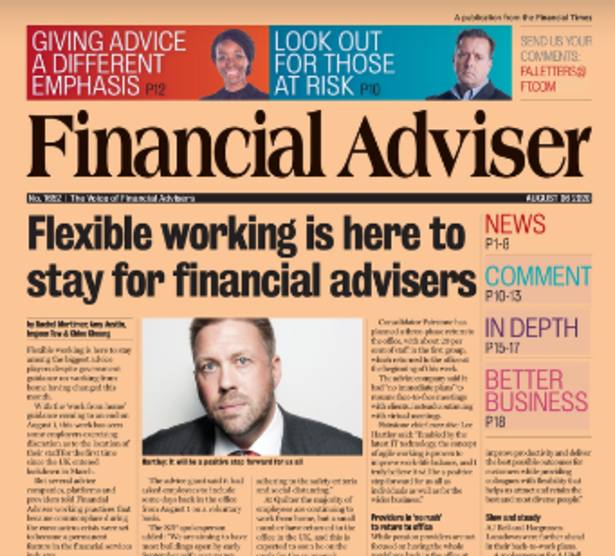 Flexible working is here to stay for financial advisers

We need to look out for the vulnerable