The Financial Conduct Authority has urged IFAs to take the consumer duty seriously, adding that it should be seen as a "significant regulatory initiative".

Speaking at FTAdviser’s Financial Advice Forum yesterday (September 22), director of consumer investments at the FCA, Therese Chambers, said: “The main thing we want you to have in mind in terms of the implementation of the duty is, please take this seriously.

“This is a significant regulatory initiative, we are consciously seeking to raise standards in this sector,” she added.

“We don’t expect perfection in your first pass at this, but we do expect you to take your approach to implementation seriously, and that is what we will be looking at in the first instance.”

Matthew Connell, director of policy and public affairs at the Personal Finance Society, outlined why the PFS are supporting the new rules.

“Over the years we have heard a lot from financial advisers who have been banging their heads against the wall around poor levels of service, product providers who are hanging onto funds when advisers want to move those funds from one provider to another,” he said.

Connell referred to what the FCA calls “sludge practices”, where companies take advantage of behavioural biases to hinder consumers from making decisions in their interests, for instance the process for product cancellation not being clearly signposted on a website, making it harder for customers to switch.

Connell said he would like to see the consumer duty extended beyond the companies in the FCA’s remit, such as DB pension schemes.

When asked what impact she expects the duty to have on IFAs' fees, Chambers said the FCA is seeing a lot of homogeneity around charging practices, which "given the different target markets and consumer profiles", has surprised the regulator.

"This suggests [to the FCA] that perhaps competition is not working effectively in this sector."

Firms will have until July 31 next year to implement the consumer duty, which introduces an overarching principle and new rules that firms will have to offer.

It will mean that consumers should receive communications they can understand, products and services that meet their needs and offer fair value, and they get the customer support they need, when they need it. 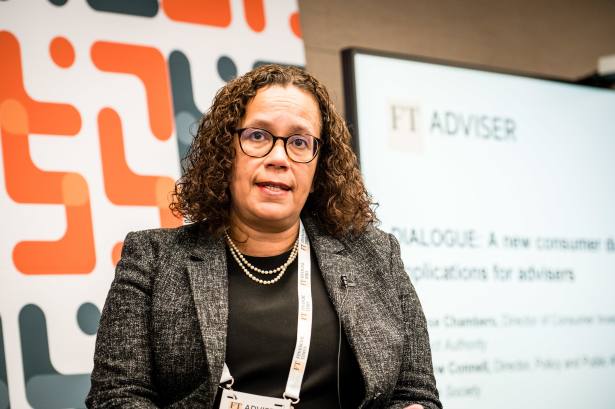 Consumer duty: High level plans will not work in practice

Providers warn about 'how seriously' FCA is taking consumer duty

Consumer duty ‘to fall hardest’ on life and pension providers

Consumer duty IFA
A service from the Financial Times